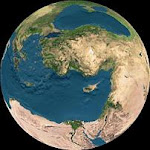 OmphalosTisGis
Nicosia, Cyprus
Omphalos tis Gis means "Navel of the Earth", which is what the inhabitants of Cyprus, this tiny knot of land in the Mediterranean Sea, believe the island is. We all know this is where anything of note happens, and are invariably surprised whenever we travel to find that Cyprus is not front page news. This blog aims to keep all of you not fortunate enough to live here informed as to developments on the island, particularly efforts to solve the intractable Cyprus problem.

A leftist moderate promising to press for a peace deal in Cyprus swept to victory in the Turkish Cypriot presidential election runoff yesterday, the Cyprus Mail reports.

Mustafa Akinci, standing as an independent, won 60.3 percent of the votes, against his rival incumbent president Dervis Eroglu who received 39.50%.

In his first speech after his victory, Akinci said he would stand by everything he promised during the election campaign. He will follow a pro-solution policy on the Cyprus problem backed by confidence building measures, Turkish Cypriot daily Detay reports.

Addressing his supporters in Inonu square in northern Nicosia after the results were announced, Akinci said that nothing could stop change because the people were determined to make the change and thanked all the parties which supported him.

Akinci said that President Anastasiades had called to congratulate him and added that they will have a meeting soon after the “formalities” are over. “This country has no more time to lose”, he stressed. “We would have liked the generations before us to have solved the problems of this island. This did not happen. If we cannot solve them either, then they could become a bigger burden for the generations after us. I told him that and he shares the same view”.

In a message to Turkey, Akinci said that he wants that their relations be based on mutual respect.

Moreover, Turkish Cypriot daily Afrika says that Akinci had said his approach would be one that protects the rights of the Turkish Cypriot people, but tries to understand the point of view of the other side as well, showing empathy.

Akinci added: “There has been much pain in the past,” he said. “But we were not the only ones who experienced this, the community in the south also experienced pain. It is time to heal our wounds. The past generations shared this pains. Let the future generations share the blessings of this island.”
The Cyprus News Agency reports that UN Secretary General`s Special Adviser on Cyprus Espen Barth Eide, also congratulated him and said he will be in Cyprus between May 4 – 8 to continue preparations for the resumption of peace talks.

The election of Mustafa Akinci to the leadership of the Turkish Cypriot community gives hope that at long last Cyprus will be reunited, President Nicos Anastasiades said on Monday following Akinci’s landslide victory, the Cyprus Mail reports.

He also sent a message to Ankara to contribute towards a solution because “it is Turkey which occupies Cyprus’ northern areas.”

“We extend our hand, not to have it assaulted, but to have it accepted,” he said, and expressed the conviction that there will be cooperation for the good of the country.

Turkish Cypriot leader Mustafa Akinci’s election victory on Sunday sparked a flurry of discussions on Twitter, with some in the Greek Cypriot political elite going against the grain of renewed hope for a settlement to the decades-long conflict, the Cyprus Mail says.

Prominent hardliners – DIKO leader, Nicolas Papadopoulos, and Yiorgos Lillikas, head of the Citizens’ Alliance, were criticised not only for their refusal to congratulate the winner, but also through posting openly undiplomatic responses on the issue.

Immediately after Akinci’s win was announced on Sunday night, Papadopoulos tweeted his take on the result, setting the stage for what was to follow.

“Those who claim that the Cyprus problem will be solved because the Turkish Cypriot negotiator has changed are simply exculpating Turkey,” he said.

This was immediately countered by DISY member Michalis Sofocleous, who criticized Papadopoulos for lack of common courtesy.

“Not even for appearances,” said Sofocleous, director of the ‘Glafcos Clerides’ Institute. “Congratulate the man on a human level first!”

Unfazed, DIKO’s leader answered the question with a question. “Why exactly should I congratulate the occupation leader?” Papadopoulos asked. “Has he returned our properties?”

This sparked a number of remarks and comments, ranging from the sarcastic to those bordering on abuse.

Citizens’ Alliance leader Yiorgos Lillikas was even more confrontational, and drew his share of flak.
In response to a tweet by Omer Tilli, which claimed that “several fellow countrymen Greek Cypriots are with us at Inonu square – come and see what hope is”, Lillikas had only sarcasm to offer.

“I know what hope is… and I know what delusion is… I hope I am wrong,” he replied.

Predictably, it was not long before he was met with criticism.
“The brothers [Yiorgos Lillikas, Nicolas Papadopoulos and Yiannakis Omirou] started singing the familiar tune, that Turkey decides for everything!” user Active citizen wrote.

Once again, Lillikas opted for sarcasm. “I imagine you have never heard of Turkish occupation,” he replied. “If someone ever brings it up, just ignore him.”

But unless Lillikas was going for sparking interest in his Twitter account – under the doctrine “there’s no such thing as bad publicity” – this quickly backfired.

“This is populism and sarcasm that does not honour you,” user Mattheos Mattheou responded. “At last, get serious.”